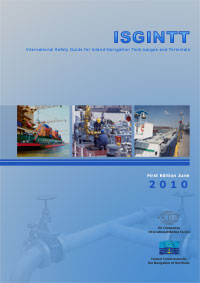 The Central Commission for the Navigation of the Rhine (CCNR) is glad to announce the publication of the International Safety Guide for Inland Navigation Tank-Barges and Terminals (ISGINTT) in German and Dutch. Personnel on inland navigation tank-barges and at terminals in the Rhine area and beyond will now be able to benefit from the guide, which is widely recognised as a valuable tool for enhancing safety in inland navigation.

The purpose of ISGINTT, which has been available in English since 2010 and in French since 2011, is to improve safe transport of dangerous goods at the interface of inland tank barges with other vessels or shore facilities (terminals). The intention is not to replace or to amend current legal requirements, but to provide additional recommendations. ISGINTT is the result of best practices as recommended by the participating organisations.

The CCNR would like to thank its Member States, its Secretariat, and the organisations mentioned on the ISGINTT website, without whom the translation of this very comprehensive and highly technical document into the additional two working languages would not have been possible.